Qatar says worker deaths for World Cup ’between 400 and 500’

China alleges US cruiser intruded into waters of South China

An open invitation from the President to all parties

A special notice from the police to motorcyclists

Stolen number plates of vehicles have been used by suspects involved in a number of shootings reported over the past few weeks, the Police said.

The Police Media Unit said investigations have revealed that several of the vehicles used in the shooting incidents have been found with number plates that had been stolen from motorcycles.

Reports of stolen motorcycle number plates had been reported to the Police Stations in the Galle, Galle Habour, Thissamaharama, Ahungalla, and Katharagama areas.

Investigations have revealed that the motorcycle used for a shooting in the Rathgama area on 31st July was seen with a number plate that had been stolen from a motorcycle in Ahungalla on 5th July.

Meanwhile, a car that was used in the shooting reported in Middeniya on 26th June had used the number plate that had been stolen in the Beruwala area.

Thereby, the vehicles that were used in the shooting incidents that were reported over the last few weeks have been found with number plates stolen from cars and motorcycles in various areas.

The Police have wa ed motorists to be vigilant about the robbery of vehicle number plates by criminals.

The public has been requested to be careful when parking their vehicles on the road and in unsafe areas, especially during the nighttime.

Motorists have been requested to immediately inform their area Police station in the event of such robberies. 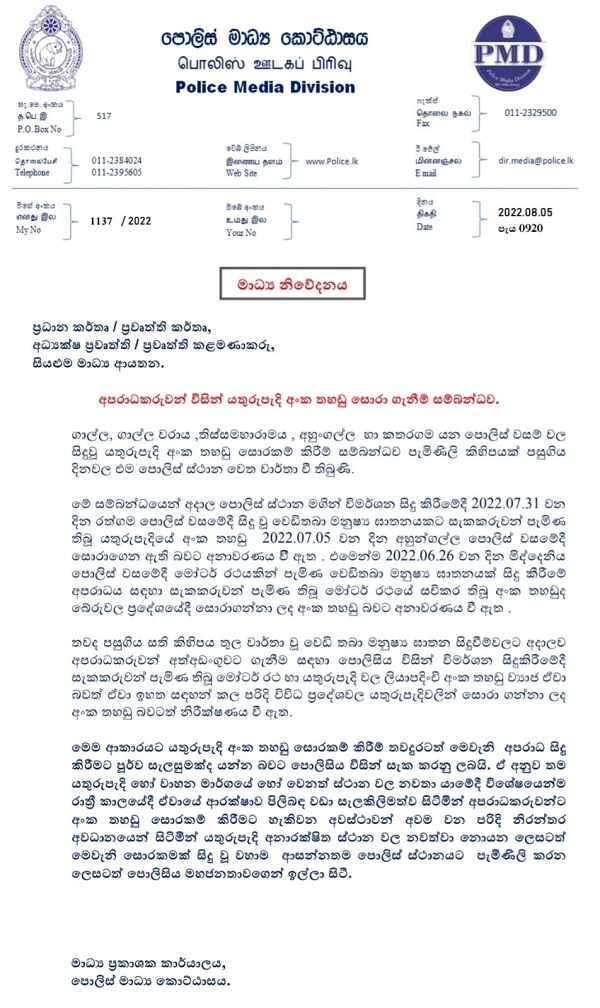 Train Timetable Amendment from next Monday

Qatar says worker deaths for World Cup ’between 400 and 500’

FIFA 2022: America qualified for the Super 16 round